DON’T Miss it this Weekend May 20th and 21st

The Former Texas Rangers Foundation has joined Hollywood Guns & Props to create a premier shooting event and the first ever opportunity for the public to shoot the actual guns used by Hollywood’s biggest film & television stars! You can actually go and shoot with one of these awesome guns.

– 6 trapdoor cavalry carbines from “She Wore A Yellow Ribbon” 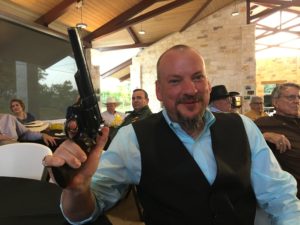 – Colt six shooters used by Marlon Brando in “One Eyed Jacks”, Leonardo DiCaprio, Russell Crowe, Gene Hackman in “The Quick & The Dead”, Jack Palance in “Shane”, Gene Autry’s from State Fairs and Rodeos, William Holden in “The Wild Bunch” and many more.

– Winchester 1897 shotguns used by Lee Marvin in “The Professionals”, William Holden in “The Wild Bunch”, and Sean Connery in “Wind and the Lion”

– Colt 1911 and shotgun used by Steve McQueen in “The Getaway”

*100 shots with the weapon(s) of choice with free furnished ammunition. (Additional ammunition is available for purchase.)

* Range Safety Officers will be available to assist new and seasoned shooters alike.

*ALL SHOOTERS MUST BE 18 YEARS OR OLDER

*Only 50 shooters per day

A donation of $25.00 per person each day admits Non-Shooters as spectators.